Ideas and contributions are valued by asking different critical questions, we encourage employees at all levels to express their opinion in order to innovate and improve our service. The scope of questions encompasses to daily operation. By doing so, management personnel can understand more about the difficulties and needs of a staff, and it facilitates the communication of innovative ideas and opinions within the organization.

The Use of Dialogue To Reach The Best Conclusion

We adopt an acute and debating dialogic style in all levels of communication to resolve organizational issues, setting up of procedures and decision making.

Working Together For The Best Results

We share a spirit of two way communications and continuous learning; this enables us to make use of different points of view to improve and optimize our services. 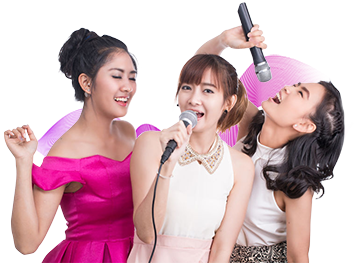 To maintain market leadership in the karaoke industry.

To be a competitive karaoke enterprise that creates value by delivering healthy, decent and excellent service to the community; employ a customer-driven philosophy to emphasize the company's goodwill and culture.

The Growth of Neway in Malaysia

The karaoke industry originated in Japan and rapidly became an increasing popular form of entertainment and eventually it gained exposure in other parts of Asia. In Malaysia, the early karaoke outlets were designed with big singing lounge and few private rooms. Majority of the karaoke outlets then were as such until the year 2004, when NEWAY with its unique family concept set foot in Malaysia, with its first outlet in Berjaya Times Square.

In ten (10) years since the pioneer outlet, NEWAY has grown consistently from the 1st outlet in Berjaya Times Square to their 10th outlet in SS2 was opened. Each outlet is individually designed and has an average of 50 private rooms. The smallest rooms cater to between 4 – 6 persons and the largest ones can accommodate up to 40 persons. Neway Puchong is currently the largest outlet occupying 2 levels and a total of 32,000 square feet consisting of 82 rooms, many rooms with individual toilet attached. NEWAY offers a complete range of songs, consisting of the latest hits, oldies as well as children's songs, all of different languages.

One of the 8th outlets was named CEO Karaoke Box and its open in the year of 2010 which located at Fahrenheit 88, Kuala Lumpur. CEO Karaoke Box is a new experience of our uniqueness and luxurious environment.

NEWAY has strategized its business plan to make karaoke more affordable and within the spending of all walks of life in Malaysia and stays focus to facilitate to all the different ethnic races. The uniqueness of an entirely 'family concept' offers a healthy, safe and superior quality as well as comfort to all our customers.

Get our FREE Mobile App

Hurry up! Join now to become a Neway Lifetime Member and get the membership benefits today.